Five hours south of the U.S./Mexico border at San Diego is the city of San Quintin. It is one of the largest cities in Mexico’s Baja California state.

The climate is temperate, enhanced by its proximity to the warm waters of the Pacific Ocean, making it a fertile agricultural area growing a wide variety of berries and tomatoes.

You would think that the world’s insatiable desire for year-round fresh produce would make this a highly prosperous and economically stable part of Mexico.

Well, that may be the case – for some. The government and large corporations that develop this fertile area prosper greatly.

But this is less so with the people who do the work to make this area an agricultural powerhouse. Instead, the vast majority of these hardworking, kind, and family-oriented people are doing their best to eke out a living. They dream to one day escape poverty’s generational chokehold.

Yes,, poverty has many faces.

I have seen abject poverty on the streets of New Delhi, India, and Cairo, Egypt. This type of poverty sucks all hope from its victims. This is not the level of poverty suffered by most of San Quintin. Rather, the poverty here is the result of extremely low wages and little or no social safety net.

The field workers make $8 a day. They board the agricultural buses at 4:30 a.m. and stay in the fields until late into the evening, around 7:00 p.m. When they come home they eat, play with the children, do some odd jobs around the house, then go to bed to face the same long day all over again.

Most work six days a week. Some work seven.

Those who have escaped the back-breaking work in the fields have found jobs in town. The main road is dotted with taco, tortilla, and bread stores. As this is a larger city, there is some wealth. This means there are supermarkets, restaurants, gas stations, repair shops, and other establishments that require a more specialized labor force.

But most labor in the fields day after day, year after year.

While their wages are meager, most save enough money to buy or rent a small rectangle of land. Here they will build their cinder block and wood homes. But they build in stages, according to what they can afford.

Some start with a dirt floor and a wood frame using tarps and cardboard for their walls and roof. 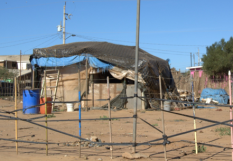 As they save more money and get more help from family a neighbors, this shanty is replaced with cinder block. Soon they cover the dirt floor with cement making the home easier to clean.

When they can afford it, they replace the plywood or cardboard roof held down by old car tires with tin.

The final touch will be connecting to the electrical grid and getting a dim, bare light bulb in each of the four rooms.

Paint on the exterior or interior is a luxury few can afford.

Water is delivered to the homes by trucks. Large barrels outside the homes act as reservoirs. At first, they may carry the water from the barrels to the home in buckets. Later they can install pipes that create a quasi-indoor plumbing system.

When the children are old enough to work, usually around the age of 12, the family increases their income by sending them out to the fields. School is cut short so that able-bodied children can contribute to the family’s revenue stream. This necessity is likely the main cause of entrenched poverty. Limited education means limited job opportunities.

However, with increased wages, they can expand the home so all the children no longer need to share a single bed. Eventually, that extra income brings luxuries like a refrigerator and stove.

There is no grass in these poorer areas.

One corner of the front yard is for garbage that may or may not be picked up by the city.

There are chickens in pens, and some roam around freely.

There are dogs everywhere.

The children love to play outside as the home is too small. This means they must play in the dirt alongside the animals.

Like all children, they are constantly dirty. But bathing is a challenge. Hot water takes time to prepare. Water for cooking and drinking is more important than bathing.

This is the face of poverty in San Quintin.

But these are not people who have lost hope.

They have pride in their homes.

They are glad to have jobs and work hard to keep them.

They love their families and care for their neighbors.

They are a giving people.

They are willing to feed those who are hungry and give shelter to those in need.

Five hours does not seem that far, but it is a world away.

To continue this series, click, Five Hours South of the Border – Origins: Part I