So this fast Sunday was pretty cool because we were fasting with a couple of our investigators for specific purposes. And we had gotten 5 people to solidly commit to coming to church, we were so excited! Then sacrament meeting started and no one was there. Time passed and no one showed up. I was devastated! It broke my heart. Also Anteneh was planning on coming to the ward after ours because he works on Sunday’s and that was the only time he could attend. We texted and called him during Sunday school because we were going to meet him before their sacrament meeting, but he didn’t answer! Then after church he called and he said “I was at the sacrament meeting, where were you?” He was so cute, he’s a little Ethiopian man and has amazing faith! We went and met him outside the church. I guess he had forgotten his phone in the car and didn’t realize we were going to meet before the meeting.

We were so excited!! And he loved sacrament meeting so much! He really wants to be baptized, but right now his wife won’t agree to that. We have been praying and were fasting for her heart to be softened!

Anteneh has such strong faith though, he said “I know it will happen someday, even if it’s not on my time. It will be in the Lord’s timing.” I’ve loved watching his testimony grow! 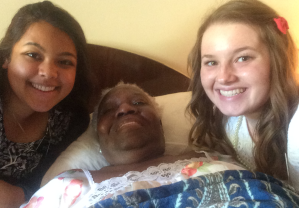